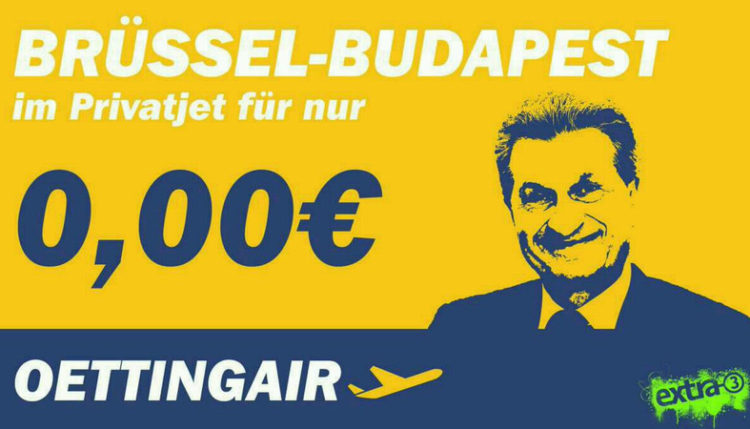 This time, it only took 4.5 hours to claim he did nothing wrong.

Just two weeks after global outrage over his racist, sexist and homophobic slur, German EU commissioner Oettinger is in the middle of new media storm for accepting a free trip on a private jet with an unregistered lobbyist nicknamed “Mr Russia”.

While Twitter is running with the tag #OettiGate (which also refers to some of his many other gaffes), the current affair has picked up its own hashtag: #OettingAir.

Mr Oettinger prides himself in being the last person to read news in a newspaper, not on a smartphone. And he – or, more likely, his social media person – bluntly shared a German article, quoting its headline; “Allegations of racism? That’s just who he is, our Oetti”.

So far, the OettingAir affair has not fared any better.

Mr Oettinger’s account was keen to retweet reports about a Hungarian government official calling the affair “petty revenge” over a nuclear power plant – but this only shows his failure to acknowledge the real issue: ethics and transparency.

Unfortunately even the Commission’s spokesperson either misinterprets the Commission’s own ethics and transparency rules (“It’s not a gift, nor a meeting”), or he pretends not to understand them. I don’t know which is worse.

The legendary @Berlaymonster (no, not Martin Selmayr) commented: This is not a meeting.

We spokes minions are making up ethical rules as we speak. #OettiGate https://t.co/FVEEMXmbMJ

On a lighter note, Mr Oettinger’s reply to EUobserver about accepting a free private flight from “Mr Russia” resulted in this Twitter gem.

Allegations are unfounded: Due to meetings, I could not take scheduled flight to be in time for dinner PM Orban. HU suggested plane.

Hi Javor, how can I help you ? /Marie

But even though Twitter can make us smile, ethics and transparency of public institutions are a serious matter, especially in EU’s current stormy climate.

Parody @GOettinger shows how Mr Oettinger’s free flight seems to have transformed into free fall – not just of his reputation, but also of the credibility of the European Commission, and citizen’s trust in the European Union.

This blog has first been published at EUobserver, on 18 November 2016