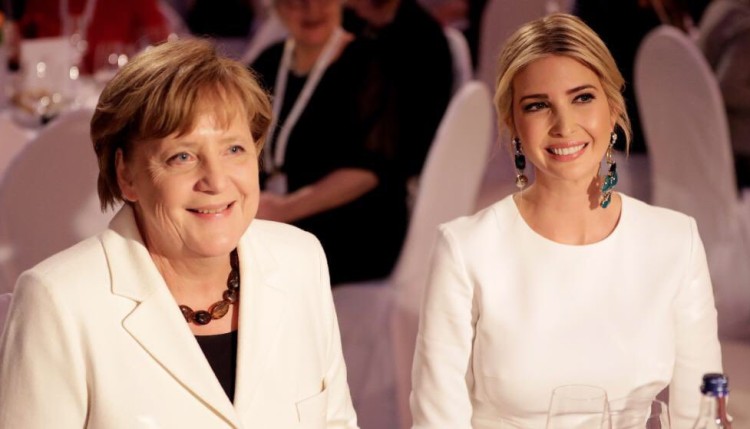 Methinks I behaved very well at the Women20 Summit. While the audience took a sharp breath and hissed in disbelief as Ivanka Trump defended her father, @WomenTwenty_Ger (run by me during the summit) stayed polite throughout the full two-day conference. After all, the summit was about gender equality and economic empowerment of women – not about Ivanka. But now the summit is over. And the Trump administration ending the ‘Let Girls Learn’ education program means it is time to speak up.*

Germany’s presidency of the W20 started low-key. But after Angela Merkel’s first meeting with Donald Trump, where his daughter Ivanka was also at the table, everything changed. When on 27 March the news broke that Ivanka would attend the W20 summit in Berlin, the organisation quickly realised this would be a game-changer for the summit. They decided to upscale the summit with a high-level panel, for which they also invited Queen Maxima of the Netherlands (UN Secretary General’s Special Advocate for Inclusive Finance for Development), Chancellor Angela Merkel, Christine Lagarde (IMF), Chrystia Freeland (Canada’s Minister of Foreign Affairs), Juliana Rotich (Kenian entrepreneur), Anne Finucane (Vice-Chairwoman Bank of America) and Dr. Nicola Leibinger-Kammüller (President and Chairwoman Trumpf GmbH).

Of course we had discussions about Ivanka being a speaker at the summit. Many of us had mixed feelings. Perhaps not so much about Ivanka herself, but we certainly did not approve of sexist behaviour by her father, Donald Trump. Nor were we comfortable with the idea of an unelected family member being a top advisor to the President of the United States. The German Minister of Foreign Affairs commented: “The mix of politics with family and business reminds us of nepotism and would be unimaginable here.” As I didn’t know much about Ivanka, I felt we should give her the benefit of the doubt. At least her presence at the summit would help raise awareness of W20’s work to empower women. And perhaps Chancellor Merkel would succeed in reaching the father through the daughter.

When the moment of high-level panel was there, the moderator did a good job. She was polite but didn’t avoid asking Ivanka some cutting questions: “Who do you represent, Ivanka? Your father, the American people or your business?” Shortly after, the audience drew their breath in disbelief and hissed and booed in disagreement when Ivanka Trump described her father as a “tremendous champion of supporting families. The moderator did well by not ignoring the audience’s reaction, and asked Ivanka to comment on Donald Trump’s publicly displayed attitudes towards women: “Doesn’t this raise doubt as to whether he has really empowered women?” To which Ivanka replied: “I’ve certainly heard the criticism – from the media.”

Apart from these awkward moments, the overall summit went really well. It was the first time delegates of all twenty G20 countries were present, the working group meetings were very productive, the W20 communiqué urging G20 to mainstream and implement gender equality was adopted, and Chancellor Merkel delighted us with her presence three times and promised to take the communiqué to the G20. And of course it was fabulous to be in the company of so many inspiring women!

Looking back on the summit, delegates wrote positively about Chancellor Merkel’s smart move: ‘Like it or not: Ivanka Trump can help us to empower women.’ And why Ivanka was actually the least newsworthy aspect: ‘The W20 made governance history, strove to bring 100 million more women into the workforce and asked leaders to ensure women were part of the future digital economy. That is news!’

Last night however, things took an unexpected turn. Only six days after Ivanka praised her father for championing women’s empowerment, the Trump administration in an internal memo announced to end the ‘Let Girls Learn’ education program, taking effect immediately. This was later denied – however without mentioning the memo, let alone explaining its substance.

Frankly, the news about the memo felt like a slap in my face. And apparently I was not the only one. My tweet about it went viral:

What will you tell Merkel about your dad ending #LetGirlsLearn — just 6 days after you defended him at the #W20summit ? https://t.co/MRZyQyK5xV

I truly feel the memo and its timing are an insult to all the women at the W20 summit, not to mention to Chancellor Merkel.

With currently no clarity about the memo (will Let Girls Learn be ended or will it just be rebranded?) or any other upcoming gender equality budget cuts, we are left with one burning question:

Dear Ivanka, we women want to know: will your father walk your talk?

*I am not part of the W20 Germany organisation, nor am I speaking on their behalf. I was hired to run the @WomenTwenty_Ger account for four days and to live-tweet the W20 summit. This article is my strictly personal view.